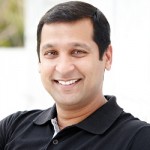 Girish Ramdas is the Co-founder and CEO of Magzter, a New York based start-up, with their Global back-office at Chennai, that has been making waves in the global digital publishing business. In just 6 years Magzter has crossed 35 million users from 150+ countries, with 9,000+ magazines from over 3500 publishers from 50+ countries in more than 40 languages. Magzter has now become the World’s #1 digital newsstand. He has more than 20 years of experience in cross-platform publishing, including print, mobile, and Web development. During this period, he has co-founded and run three successful start-up businesses in technology, content and digital space.

He was voted the CIOL Technology Person of the Year for 2012 for his contribution to the global digital publishing business. He was invited to speak at the prestigious World Magazine Congress in Rome in 2013 to address the world publishers on digital publishing and its future. He was also awarded the TiE Innovative Entrepreneur of the Year award for 2013 and recently was listed for the second time in the Fortune magazine’s 40 under 40 list of global Indian Entrepreneurs. Magzter has also been awarded the TiE “Billion dollar baby” award for companies that they predict will soon be billion dollar companies.

Recently, he has earned an Owler 2017 Top Rated USA CEO Award in Media and Entertainment!

Fun facts: He has earned six Indian national gold medals in rifle shooting and holds the national record in one event. He runs 5 – 10 kms everyday. He is an avid Tennis player and golfer too!.