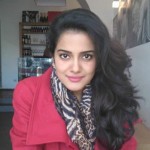 Vishakha Singh is an Indian Film Producer and Actor.
Her films as a producer (‘Haraamkhor’ ing Nawazuddin Siddique & ‘Peddlers’ ing Nimrat Kaur) have been showcased at the Cannes Film Festival.
Last year, she produced the National Award Winner, ‘Onaatah’ , a film based in the North East of India.

As an actor, she awaits the release of FukreyReturns in Dec 2017, a sequel to her hit film FUKREY.

Vishakha’s experience in the Indian entertainment industry has led her to partner with ex-IBMer, Sandesh Suvarna and make India’s 1st multilingual chatbot, IconicBOT, for influencers in the film industry.

The company has been accelerated under the ‘Elevate’ program by the The Ventury , a leading company in Vienna, Austria.

The Viennese company has also bought stake in the company.

IconicBOT is young but has already collaborated with some of the biggest names in Bollywood and South India, the details of which shall be revealed in the coming months.