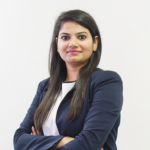 Admitad Media Private Limited (Admitad India) is a subsidiary of Admitad GmbH (German Company). Neha Kulwal, CEO, Admitad India contributed as a key founder member in setting up of Admitad India. From the date of Incorporation, she contributed key role in upbringing name of Organization to greater heights, be it matter of business deals or a company representations, she deals in highly professional manner taking the team in the growth. In a tenure of 1.5 years, Admitad earns good name in the Affiliate Marketing industry which is well highlighted in our exclusive client base and financials.
7 years in Affiliate Marketing, Neha Kulwal, CEO Admitad, has achieved many milestones and recognition during this tenure which is well reflected how she is guiding the future of Affiliate Marketing in India.
Hard working attitude along with making good friends rather than clients, makes Neha a successful entrepreneur which can easily be tracked how she jumps from the position of Assistant Manager at Optimize Media Group to Director at Admitad in short span of 6 years.
With expertise in affiliate industry and unrivalled knowledge she proves all what she had achieved till now. She believes in continuous learning, adapting innovative approaches and utilize them in a productive manner. She is a regular speaker and contributor at various affiliate summits and talks.
Right from the Consultant review (http://www.consultantsreview.com/ceoinsights/the-importance-of-media-consulting-in-online-marketing-vid-674.html) being a CEO, she shared her thoughts on importance of media consulting, next to this in India affiliate summit2016 (http://www.indiaaffiliatesummit.in/wp-content/uploads/2016/09/Report.pdf) organised by Tata strategic management group she has spoken over affiliate marketing and contributed her thoughts in white paper on affiliate marketing. Also, she has represented Admitad at various platforms like: India affiliate summit, Ad tech, New York affiliate summit east and continue with that.
Recently, 4th World Women Leadership Congress honoured Neha Kulwal with an Outstanding Women Entrepreneurship Award (http://www.worldwomenleadershipcongress.org/awd-winners-2017.html), at their congress in Mumbai, India on Feb 17, 2017.