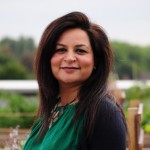 Priya Sharma is co-founder and CFO of ZestMoney, the digital consumer lending company that is revolutionising the way Indian consumers transact online.

Priya was at Wonga.com in London where she looked at international markets expansion especially India. Priya and Lizzie founded Wonga in India and developed ideas for disrupting financial services in India. The project was put on hold and Priya went on to head corporate development for Wonga, looking at investments, acquisitions and strategy

Prior to Wonga, Priya was at Bank of America Merrill Lynch London where she advised companies on mergers and acquisitions and strategic decisions. She focused on the telecom, media and technology space and has played a key role in several deals.

Prior to BAML, Priya was a management and technology consultant with Deloitte (New York) and Sapient Corporation (Gurgaon). She has advised a variety of clients on problems such as supply chain optimisation, post-merger integration and e-commerce design and development.

Priya holds an MBA from the London Business School and a B.Tech from Indian Institute of Technology – BHU.

Priya is an amateur photographer and avid traveller. She has played basketball in various state and city level championships but now enjoys running and yoga.